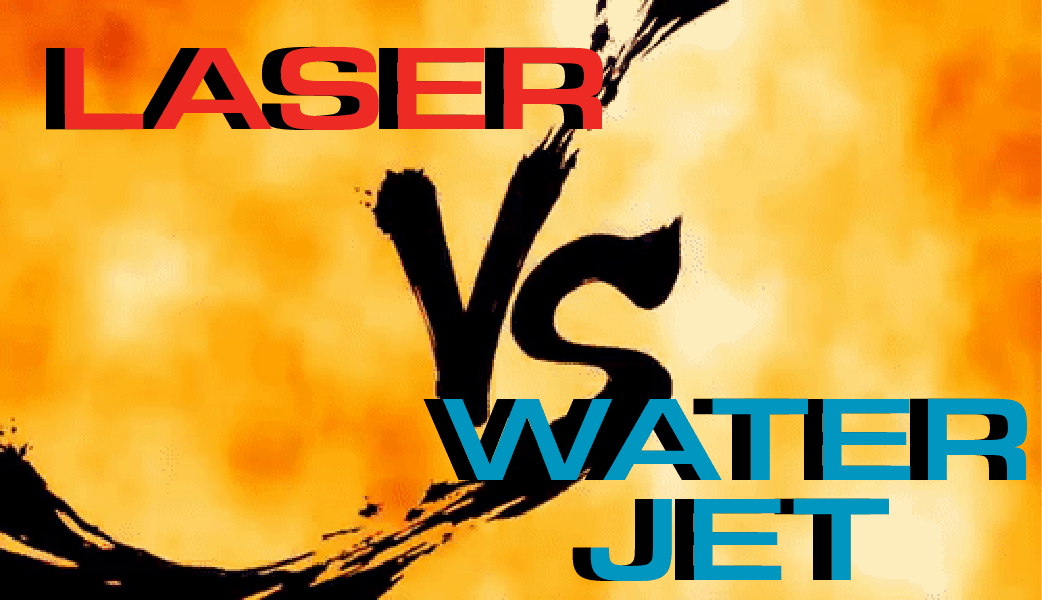 A common question we have here at Emtek is if the parts in question are better to be processed by laser cutting or by waterjet cutting. There are a few deciding factors that will determine which process is the appropriate one for your components.

The first, and most blatant deciding factor is the thickness of the material to be cut. Our most powerful CO2 laser (6000 KW Amada FOM2) can cut up to 1” thick carbon steel and ¾” thick stainless steel. Our fiber laser (6000 KW Amada ENSIS) can cut up to ½” thick aluminum. Anything thicker than this in the respective material will need to be processed on the waterjet. Our waterjet has a capacity of cutting up to 6” thick material of any type. There are a couple of other deciding factors on this as well. If there are holes in your component that have a diameter of less than the thickness of the material in question you would like it cut from, the laser generally will not do a good job of processing these and they should be processed via waterjet. Sometimes small holes are best processed in a secondary method such as CNC machining or drilling.

There is a common debate amongst laser versus waterjet and that is which process produces the best edge finish. In most circumstances, on anything thinner than ½ laser finish is the ideal finish for your component. It produces a crisp, clean edge that is shiny and smooth to the touch. Waterjet edges, while smooth, are much duller and can have a milky white haze around the cut of the part. This is a result of the garnet that is mixed with the waterjet stream creating a virtual sandblasted effect in the cut area. That being said, because of the process of erosion the waterjet can produce smoother, cleaner edges with a slow, steady cut. This can be the difference between a part requiring secondary machining (if produced via laser) and not requiring secondary machining (if produced via waterjet.)

While lasers are generally considered a good process for reducing heat effected zones compared to plasma or flame cutting components, it is inevitable that an element of heat is still introduced to the part at the point of cutting. When adding an element of heat to steel and alloys, the material will harden which makes secondary machining much more difficult and harder on your tooling. While it does not render it impossible, it is best to avoid introducing heat as much as possible when planning on doing any secondary machining to your components. Waterjet, on the other hand introduces absolutely zero heat to a component which allows it to be machined with ease during any secondary or tertiary processing that is required.

The final major deciding factor between waterjet and laser is cost and time. While being a more costly process per hour, the laser will produce components at sometimes 10 times the speed of a waterjets production capability. This will lead to shorter lead times and a cost savings per unit. On the other hand, the waterjet is cheaper on an hourly basis, however it is a much slower process than laser which could increase costs per unit relative to the time taken to produce.

Ultimately, there are many factors that decide whether your project should be completed with waterjet or laser. There is usually a clear answer, but if you’re stuck somewhere in the grey area, don’t hesitate to contact us at Emtek to help you decide and get the best results for your need!