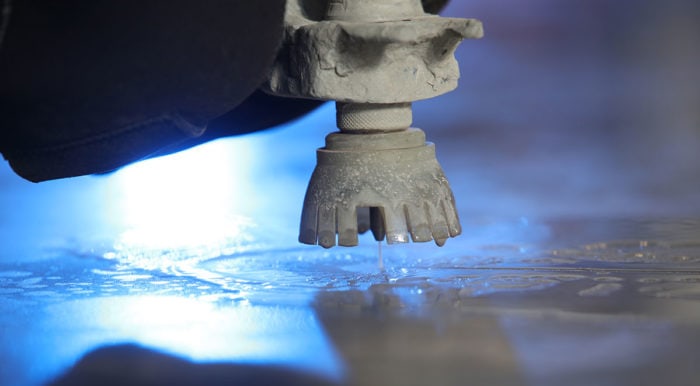 The Waterjet Process – How Does It Work?

Water makes up 71 percent of the Earth’s surface. Up to 60% of the human body is water. It provides us with an infinite source of hydration, and rejuvenation. Water truly is man’s greatest resource. In the 1930’s the Paper Patents Company in Wisconsin took this resource and developed a system involving a nozzle spraying high pressure water moving back and forth over a sheet of continuous paper. This would set the stage for what we now know to be the modern-day waterjet. In the years to come, research and development in the field provided the ability to achieve higher pressure to cut thicker and harder materials. The question stands though: how does this all work? How can a liquid cut through a hard solid like stone or metal? There are 2 major factors that enable this to happen. In this 2-part series we will discuss what makes this possible!

The first major factor is the pressure of the water going through the nozzle. Your average household electric pressure washer will produce anywhere from 1300 to 1700 psi of pressure. Think about if you are pressure washing your deck and put the nozzle too close. It will etch into the wood of the deck. By comparison, our Flow Mach 3 waterjet at Emtek produces 87,000 psi of pressure. That is the equivalent of stacking 17 and a half rhinos in a one-inch square. It’s safe to say that that’s a lot of pressure!

In grade 4 science class, I was taught that the three biggest factors in creating pressure are force, space to travel and release point.  (Thanks Mister Rotozinski!)

If the force pushing the liquid through the hose increases, it is safe to assume that the pressure coming out will increase as well. Pretty self explanatory. If you reduce the amount of space that are pushing your liquid through, the force on the back end will need to increase, but your pressure will also increase.

These steps are achieved by the intensifier pump. Basically, the way it works is the low-pressure water enters one side of the pump and gets pushed through an area that has a size about 1:20 of the low water pressure entry side. WardJet.com states “if you apply pressure to one side of a cylinder and the other side of the cylinder is the same surface area, the pressure on the other side will be the same. If the surface area of the smaller side is half, then the pressure on that side will be doubled. Generally with intensifier pumps there is a 20 times difference between the large surface area (where the oil pressure is applied) and the small surface area (where the water pressure is generated). The following picture shows this concept.” 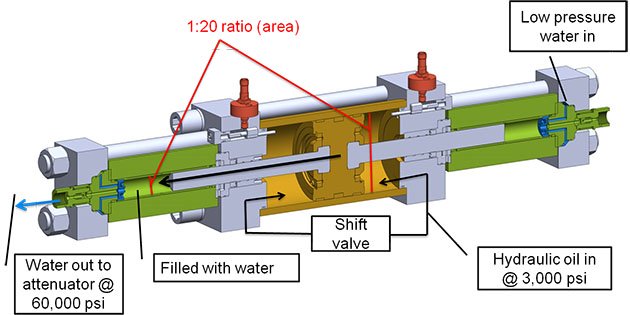 The last factor in creating pressure is the release point. This is the point where the liquid exits the pressure chamber and is exposed back to the open world. All the pressure that has built up internally is now released in a concentrated stream. The smaller the opening, the higher the pressure will be. Think about running a garden hose. If you put your thumb over the end, essentially closing off the opening to create a smaller release point, the water pressure will increase, and the water will travel farther. (Another hot tip from Mr. Rotozinski!)

But if the stream is strong enough to cut through steel, then how does it not cut right through the release point? Waterjets accomplish this by using a diamond orifice at the release point. Diamond is a much harder material than steel. This is because the molecules of a diamond are packed much tighter than those of steel. Think about it: all diamonds are is compressed carbon – hence the tightly packed molecules.

By using the diamond orifice waterjets can allow all that pressure that is built up to be released at the end and still have a concentrated stream. The diamond is strong enough that it holds the internal pressure of the water without blowing out like plain steel would. This is not to say that these components last forever though. The diamond still slowly wears away. In fact, the diamond orifice is one of the most commonly replace consumables of a waterjet.

But this is not the only factor that contributes to the ability to cut steel with water. There is an additional component that is added in. Stay tuned for Part 2!